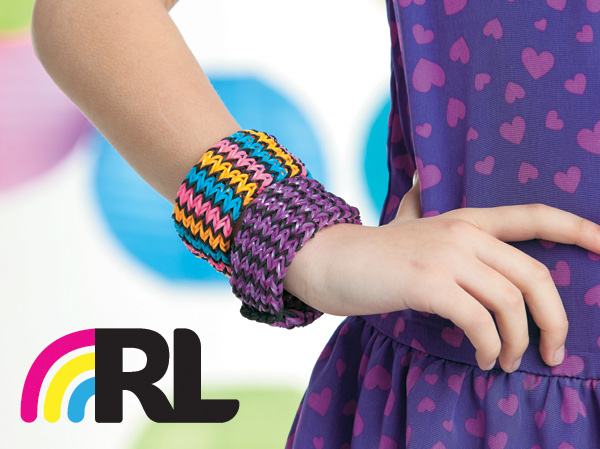 Ever wondered just how much better the original Rainbow loom products really are?

Ok so by now you’ve watched hundreds of online video tutorials on Youtube and have most likely felt a little green with envy at how smoothly they work and how perfectly their creation turns out.  What you may not know is that the outcome also relies quite heavily on the products you’re using.

What I’ve recently discovered with the original Rainbow loom products.

My name is Aura and I am the official loomer for the LoombandSA website, so all the creations you see on our tutorial page, I’ve made…. and yes I absolutely love my job.

When the Rainbow loom stock arrived in our warehouse I was given permission to help myself to product for our tutorial blogs, like a kid in a candy shop I grabbed a bag of every colour as well as the awesome deluxe kit and started looming with a big smile on my face.  Wow!!!  is one simple word to describe how amazing working with the original is.

Since using the Rainbow loom product I have not had a single band snap on me, where I personally found that so frustrating when half way through a design or almost finished whilst using generics.   The bands stretch to my capacity needed and my fingers don’t feel dirty after a creation.  But the most exciting part is the final outcome, it’s just “different” the bands are smooth to work with and don’t twist so easily, every band is the exact same size and perfectly round which I now realize makes a difference in the final outcome.
What was also heart breaking for me with the generic bands was the quick deterioration, there is nothing worse than spending hours on an advanced design only to see it start snapping a few weeks later.  With the Rainbow loom original bands, this does not happen at all, I have personally left a bracelet in the sun for over a week and it is still perfect.
I suppose it all makes sense now why some manufacturers used phthalates in their bands to make the bands last longer but causing a big cancer scare.

I took the liberty of taking a few photos to help clarify what I have explained. 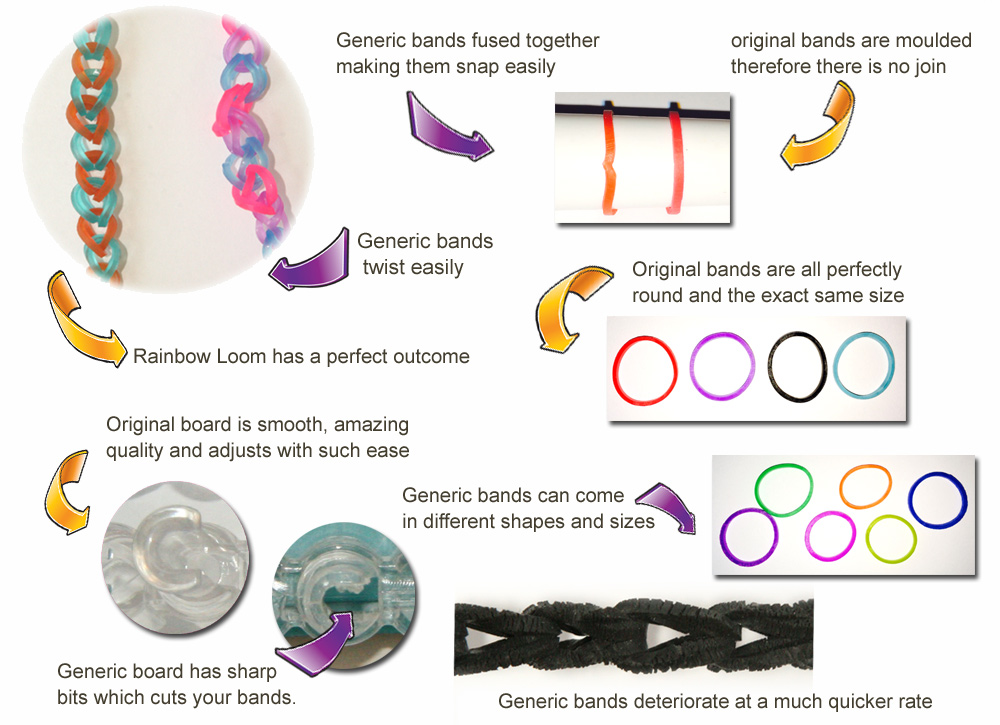 My personal opinion on the whole Loom band crafting phenomenon

A crafting toy that’s played with long after the craft, has captivated hundreds of thousands of children and adults around the world, why?

Firstly parents buy their children craft toys because it encourages their childs creativity, gross, visual and fine motor skills, emotional regulation and attention span.  When Rainbow loom entered the market children were begging for it because of the bracelet trend.  Rainbow Loom winning many awards speaks volumes for itself.

Unfortunately due to the popularity thousands of fakes entered the market and in my personal opinion there were many cheap bands and kits that killed the appreciation of the product.  I for one was put off after buying my 5 year old a cheap kit from a local store.  The bands were sticky and twisty and if they didn’t break, the end result looked nothing like the video tutorial, after a week the board broke so easily when trying to adjust it – we threw everything away and I had no interest to buy again.  It makes me wonder how many other South African moms and dads feel the same way I did, totally robbed of the benefits involved with this craft toy due to buying cheap fakes.

I personally will not work with any other bands besides the original Rainbow loom product. I am thoroughly enjoying the original brand.